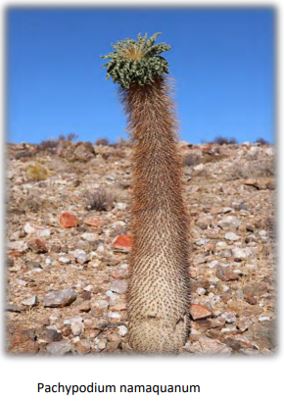 When Phyllis (my wife) and I decided we wanted to visit South Africa for a third time we reached out to Rob Skillin, a horticulturist located in the San Luis Obispo area, and he suggested contacting Karel du Toit as a possible guide. Karel as it turns out, is a member of the South African Police force and a former professional rugby player who now is a devoted naturalist who regularly studies the flora of an area in South Africa known as Namaqualand. 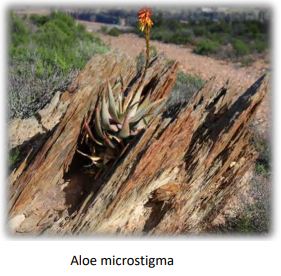 After conversing with us for a period of time he built a flexible schedule that enabled Phyllis and I to explore and experience the thriving flora of this geographical area. We wereintroduced to a variety of different succulents – some very small (mesembs) and others very large (Aloe pilansii) - that were captivating in spite of the fact that South Africa has been in drought conditions for several years. We had the extraordinary opportunity to spend almost three weeks traveling north from Cape Town to Springbok seeking out some of the most exotic plants found anywhere on earth sometimes in highly unusual ecosystems. In addition to the plants. we were treated to many different aspects of the South African culture that enabled us to even more appreciate this unique and strange ecosystem. Karel’s familiarity and access to locations made the trip extraordinarily fulfilling.

Steven Frieze has been involved with collection, sales and propagation of cacti and succulents for over thirty years. He is a lifetime member of the Los Angeles Cacti and Succulent Society where he served as the President of this club for a number of years and as its newsletter editor for several more. Steven was one of the founding owners of Desert Creations, an exotic cactus and succulent nursery. Steven has made several plant related expeditions to exotic locals such as Chile, East Africa, South Africa, Oaxaca Mexico, Costa Rica, and Brazil. He and his wife have started Distinctive Flora, a plant business that specializes in exotic plants such as tillandsias, bromeliads, cacti and succulents.